The roots of Indian history lie in its historic forts, the ancient temples and the fascinating architecture. Unfolding these marvels will offer you a peek into the rich Indian history.

India is a diverse country steeped in history. Its past has seen a melting pot of various religions, cultures, rulers and empires – all of which have left their mark on the countryside. Many historical places in India are listed as UNESCO World Heritage sites due to their cultural importance. 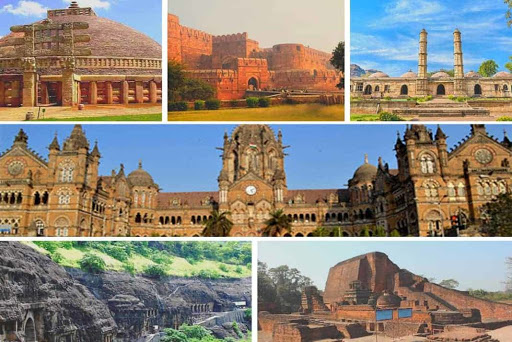 Here are a few historical places to visit in India:

One of the Seven Wonders of the World, the Taj Mahal is undoubtedly India’s most famous monument. It looms evocatively from the banks of the Yamuna River. Mughal emperor Shah Jahan had it built as a mausoleum for third wife, Mumtaz Mahal, who died in 1631. Construction took place over 16 years, from 1632 to 1648.

The Taj Mahal is made out of white marble but its colour captivatingly appears to gradually alter in the changing light of the day.

One of the tallest creations in the Indian history is the Qutub Minar. With its red sandstone and aesthetic Iranian architecture, the minaret is the most famous tourist attraction in India.

This UNESCO World Heritage site towers at a height of 240 feet making it one of the tallest ancient towers across the globe. Understand the history of the minaret by reading the inscriptions engraved in Parso-Arabic and Nagari characters.

Built by Qutub Ud-Din-Aibak in the 19th century this tower is a must visit place in Delhi.

Mumbai’s most recognizable monument, the Gateway of India, occupies a commanding position overlooking the Arabian Sea at the harbour in Colaba. It was built commemorate the visit of King George V and Queen Mary’s to the city in 1911. However, it wasn’t completed until 1924.

The Gateway of India subsequently played a significant part in India’s history. The last British troops departed through it in 1948, when India obtained Independence.

The splendid Amer Fort sits atop a hill called Cheel ka  Teela, safeguarded by the Maota Lake. The essence of the Amer fort lies in its captivating architecture and the lustrous red sandstone and marble.

The gigantic fort has some mystical elements enveloped in it, like the Diwan-i-Khaas, the Diwan-i-aam, and the fascinating Sheesh Mahal. Enjoy an elephant ride towards the Suraj Pol (Sun Gate).

A hidden tunnel in the fort takes you on a prolonged path bridging it to the Jaigarh Fort.

Situated in Karnataka, the exquisite city of Hampi houses some of the most breath-taking temples.

The Virupaksha Temple situated in Hampi is the most astonishing marvel ever discovered. The sculptures of Lord Shiva carved on stones are the predominant feature of this spectacular temple. Built under the ruler Deva Raya II of the great Vijayanagara Empire is a UNESCO World Heritage site in Hampi.

Enjoy the annual festivals of Virupaksha, Pampa, and chariot in Hampi to get a deeper look into the ever so opulent temple of Virupaksha.

Devoted to the Sun God ‘Surya’, the prepossessing Konark Temple is the most spellbinding historic site in Odisha. The Kalinga architecture reflecting in its gigantic chariot, pillars and walls give the temple an Odiya touch.

Also classified as ‘Black Pagoda’ by some European sailors, this UNESCO World Heritage site has also featured in the list of 7 Wonders of India.  The magnificent Khandolite rocks make the beauty of this temple even more alluring to the human eyes.

The Sanchi stupa stands as an unparalleled example of the majestic aura that is encompassed within the Buddhist style of architecture. Ancient relics of Lord Buddha are rooted within the dome- shaped structure of the stupa, which was how the structure looked until the dawn of the 1st century.

The stupa borrows its esteem from its commissioner, Ashoka of the Maurya dynasty, whose stature can be well indicated in the terms of the stupa’s altitude. The 54 ft. high stupa tells the tales of Lord Buddha’s life through its mesmerizing carvings, whose intricacy personifies the architecture.

Marked as a UNESCO world heritage site the stupa is visited regularly by countless visitors.

Located right in the heart of Kolkata, this memorial has been named after Queen Victoria. The elegant white marble structure is girdled by lush green gardens which together cover 64 acres of land.

Small sculptures and statues, which are spread throughout the gardens, add further charm to the memorial premises.

The memorial is illuminated by lights in the evening and runs high in terms of seraphic beauty. Don’t miss out on the evening show called ‘Son et Lumiere’ on your visit.

Built at the zenith of Mughal Empire by Shah Jahan, Lal Quila was completed in a period of nine years. The fort today stands as a testimony to the magnificent glory and power of Mughal Sultanate, adorned in walls of red sandstone. One of the most politically significant monuments, the Red Fort witnesses the Independence Day celebrations every year.

A fine blend of Persian and indigenous architectural styles, the Red Fort hosts important key rooms such, Diwan-i-aam, Diwan-i-Khas, Mumtaz Mahal, Rang Mahal among many others. Spending a pleasant autumn day around the lawns of this area would be the perfect way to walk through the history of Mughal India.

Built by British architect Lord Henry Irwin in 1912, Mysore Palace is located in the heart of the city. An architectural wonder built in Indo Saracenic style, this palace features intricate interiors. Interestingly, Golden palanquin was used by the Maharaja which was then carried  by elephants during the annual Dasara festivities. Goddess Durga’s idol is now placed inside the palanquin.

The months between October to March are the most pleasant and offer a comfortable stay here. Avoid summers as they are very sultry hot.